Twelve year-old Richard Turere lives on the edge of Nairobi’s National Park. Lions from the National Park roam freely and have in the past killed his father’s livestock, which he has the duty of herding. After exhausting a multitude of options, Richard devised a tactic that capitalises on the lions’ fear of moving light. An electronic circuit with blinking lights tricked the lions into thinking he was moving around with a flame, when in actual fact, he was asleep.

Richard’s idea could easily be turned into a profitable business, right? Not necessarily. There are countless entrepreneurs with innovative business ideas like Richard’s who are not able to sustain their businesses beyond two years, and this problem is intensifying. The latest Global Entrepreneur Monitor (GEM) Report has revealed a drop in South Africa’s entrepreneurs from 10% to 6% from 2013 to 2014.

If there is such a positive outlook on entrepreneurship, why is South Africa experiencing a drop in entrepreneurship numbers? There must be other things at play. The common cause identified as holding entrepreneurs back from growing, or starting, their businesses, is what the GEM Report refers to as the Entrepreneurial Framework Conditions (EFCs). Plainly put, these are the operating conditions facing entrepreneurs on a daily basis. EFCs can include the political environment in which the business operates, and the laws of the country, particularly the laws relating to access to finance and access to entrepreneurial education.

In South Africa, the political environment is stable, and there are government programmes available to support entrepreneurs. However, the issue with the different programmes is that they are disjointed and do not contribute towards a common goal. Access to finance is a challenge because of laws like the National Credit Act (NCA). It’s intention is to protect consumers, but the consequence for entrepreneurs is that it withholds desperately needed finance. In terms of education, it is widely recognised that South Africa’s basic education systems does not effectively prepare the youth for participation in the economy. Education is a critical enabler of entrepreneurship, without which people lack the requisite knowledge to turn an innovative idea into a feasible business.

Despite some of the bleak statics, and the challenges associated with the operating environment, there is light at the end of the tunnel in the form of you, the ordinary citizen, and well-established businesses. A good example of this is the “Small Business Fridays” campaign run by Nedbank, which urges big businesses and citizens to support small businesses. Nedbank walked the talk by buying goods from 3100 small-to-medium businesses during 2012. The call extends to you, as an ordinary citizen to support local businesses, and to tell your friends about them. While this will not solve all the problems, it is a step towards turning 12-year-old Richard Turere into the next Richard Branson. 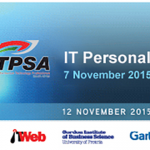 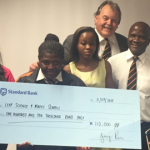 Being the difference for LEAP Science and Maths SchoolsMaking a Difference